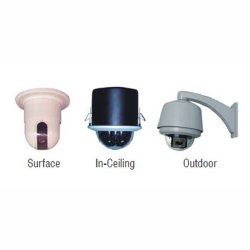 PTZ cameras are some of the most powerful security cameras on the market today. These are video recording devices that can pan, tilt and zoom, hence their name PTZ cameras. Panning allows these cameras to move and survey a wide horizontal area, while tilting allows them to look up and down. Zooming refers to these cameras’ ability to focus in on a specific place within their field of view. These three features combine to create cameras that can monitor anything in their view, which is often 360 degrees.

Tracking someone or something with a PTZ camera takes some knowledge and experience. As with any product, some PTZ cameras are built to higher standards than others. They do not all track objects equally well. There are also two different ways to track with a camera: manually or automatically.

The first step to tracking moving objects or people with a PTZ camera is knowing the camera’s abilities and limitations. What a camera can and cannot do is determined by both the camera and computer linked to the camera. In most cases, a computer monitors a system of multiple security cameras.

Conventional PTZ cameras are able to pan across an area. Anytime they find something worth investigating, they can zoom in on it and track it. Most of the PTZ cameras for sale today, though, can only focus on one area at a time. Although they might be able to look in any direction, they can only point in one direction at a time.

PTZ cameras can be tilted up and down with small motors. This is also how they are moved to pan an area. Nearly all PTZ cameras can tilt to meet most businesses’ needs. Some cameras, however, are louder than others when tilting. This is becoming a minor issue as technology advances, but there still are some cameras on the market that have loud motors. These might be cheaper, and their noise might be a non-issue. For the most sophisticated PTZ cameras, though, business owners should look for silent panning and tilting abilities.

PTZ cameras use one of two methods to zoom, depending on whether they have an optical or digital zoom. These types of zooms are identical to those used in consumer cameras and camcorders. They have a direct impact on the resolution of a zoomed-in image, so understanding how a PTZ camera zooms in and out is important.

An optical zoom works by moving two lenses inside the camera either closer together or farther apart. As the lenses are moved, the camera is able to focus on different distances. Thus, a zoomed-in image from an optical lens is the actual image the camera saw. It will be clear, as long as the camera was clearly focused.

A digital zoom takes one broad picture of an area. A user then can zoom in using a computer. Initially it appears that the process is the same. If one zooms in a lot, however, the digital method of zooming becomes evident. All a digital zoom can do is blow up a section of its one broad photo or video. A computer increases the size of each pixel. Thus, when a digital zoom is highly zoomed in, it will become grainy and lose focus.

An optical zoom will technically provide a clearer picture than a digital zoom. Whether a business needs the ability of an optical zoom will depend on the area it is surveying and the items it wants to track. A high-quality optical lens can see hundreds of feet away, or it can focus in on very small details within a room. These lenses, however, can be expensive. Every business owner will have to decide if an expensive optical zoom is worth the cost.

Another important consideration is the reliability of PTZ cameras. After all, if a camera is broken, then it cannot track any movement or record any video, regardless of how good it is. Most cameras are generally reliable, but companies should check for reviews of a camera manufacturer. Companies with a long history in the industry and a good reputation are probably more reliable than those that just started making cameras last month. There are a few moving parts in PTZ cameras, which allow them to pan, tilt and, in some cases, zoom. The best manufacturers provide excellent warrantees for these moving parts. Recommendations from technicians can also be a valuable source of information about the reliability of a camera system.

The final aspect of a PTZ camera security system that must be understood is the computer and software running it. There are several software programs on the market. In most cases, manufacturers will recommend a specific one, or they will at least list the security software programs that are compatible with their cameras. People having a security system installed should rely on the technicians and sales rep for advice on which software to use. The company providing the cameras should also be able to show people how to use the software.

The computer running the PTZ camera or the PTZ camera system must be powerful enough to quickly direct the camera or cameras. In a few cases, an office computer that is used daily for other tasks can also run a PTZ camera. Most of the time, however, a dedicated computer will be needed to operate the security system. Large companies might even need a dedicated server.

Since the computer should always be connected to the cameras, many businesses purchase a desktop computer. These are generally cheaper than laptop computers. Furthermore, the security computer should not be taken anywhere, so there is no need for a laptop computer. Computers used to control PTZ cameras are often easily accessible, since they need to be used by security personnel. The recording devices, however, should either be off-site or secured behind a lock.

There are a couple of other ways businesses can reduce the strain on a computer. They can:
•  Reduce the resolution of the images recorded
•  Reduce the number of camerasThese decrease either the image resolution or the area being surveyed, but they can speed up the connected PTZ cameras.

Manual tracking requires a person, who must be constantly monitoring the security cameras. This increases the operating costs of the security system, because someone must always be working as a security guard. The advantage of manual tracking is that the guard has complete control over what is being seen.

Many PTZ cameras have automatic tracking. The cameras themselves are able to identify motion and zoom in on it. They are able to track whatever is moving throughout their field of view. A human is not required for any of this. With automatic tracking, no one must be paid to watch the cameras. If there is an intrusion, however, there will not be anyone to immediately investigate.

Automatic tracking can be combined with manual tracking. Large facilities often have dozens of cameras that must be watched, including many PTZ cameras. It is impossible for one person to monitor this many cameras, but he can focus his attention on a single camera that has been triggered by automatic tracking.

Understanding how to track movement begins with understanding a camera’s pan, tilt and zoom abilities, as these directly influence how well it can track an object or person. Another important consideration is the reliability of the camera, since a broken camera cannot track anything. Finally, the software and computer system influence a camera’s effectiveness.

Once a person understands the components of a PTZ camera, he can decide what the best method of tracking is. Most cameras can be used manually, automatically or remotely. The best combination of these will depend on the cameras, the company’s security budget and the number of cameras. Contact us today to find out which PTZ camera is right for you.