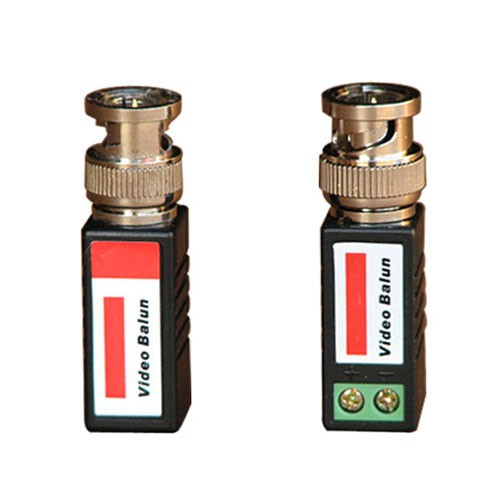 I help people design hundreds of systems every year. We create all sorts of designs, and for all sorts of scenarios. People choose from many types of equipment for various reasons. I find that most of the time when they design they don’t consider two of the most handy devices available on the market. The balun, and the Balun hub.

When people do choose to use baluns, they do so usually because twisted pair cable has already been chosen for one reason or another. It may be because IP could be used in future installs and upgrades. Perhaps its because the cable already exists. Both of these opportunities are excellent reasons to use baluns. However, there are many other ways to place baluns into your design. Here are some limitations to consider.

Voltage loss: Perhaps the largest downfall of using UTP (Unshielded Twisted Pair) and STP (Shielded Twisted Pair) cabling is the gauge of the wire does not lend itself to long distances. Most twisted pair is 20-24AWG. Wire this thin does not conduct low voltage well over long distances. Essentially, the voltage drops down as the distance increases. If you do not provide ample voltage to a camera, it may not work at all. If it does work, you may seriously reduce the lifetime of the camera. The subjects of bi-cabling and powering locally are covered later in this article

Video Distance Limitations: There are 2 different kinds of baluns available. Each has its own design application. The first is “passive balun”. Passive baluns do not require power and can send video signal up to 1200 feet over a twisted pair. We often recommend only using them for runs of 800 feet and less, and extreme runs are far more susceptible to problem. The second type of balun is the “active balun”. Active baluns utilize special powered transmitters and receivers to broadcast a video signal over twisted pair for a far longer distance. Active baluns typically should not be used for distances under 500 feet and can transmit for distances up to 5000 feet. However, it depends on the continuity of the twisted pair, the quality of the wire, the amount of interference, and several other factors. We usually will only recommend their use for up to 3000 feet. Passive and active baluns do not work together, but you can put a passive pair connection on the same multi-pair cable as an active pair, as long as passive and active baluns are not used on the same pair.

Combating interference on passive baluns: One of the biggest problems with UTP transmission is the unshielded nature of the cable. This means very small amounts of interference can wreak big havoc on your installation. You can remedy this disturbance sometimes by using a device called a ground loop isolator. They come in a few different styles, but essentially can be grouped into integrated and non-integrated models. The integrated version has the isolator and balun all together in the same box. The non integrated ground loop isolator simply goes in line between the wire-balun and DVR.

Bi-Cabling: When considering how to overcome distance limitations due to power, you can sometimes get away with simply bringing along another wire (18-2 or thicker). This will allow you to escape the shortfall of the width of the UTP wire. Again, consult voltage drop charts to make sure the power will still be enough for your cameras. Another advantage to this design is that you can often use the same cable for more than one camera.

Powering Locally: Another option when considering a camera design with voltage drop considerations is to power locally. This simply means run separate power lines from each camera to a power supply nearby, thus eliminating the need for a home run back to the recorder.

Application: With the information from above, you can now begin considering plans with multiple camera UTP designs. Many designers come up with creative uses for balun hubs in combination with single baluns. The options of optimizing existing wiring schemes also opens up and could save the installer hours of duplicate cabling.

Scenarios: Below I am providing a few ideas and concepts on how to apply baluns to your camera layout design. These are only a few ways they can be used, and hopefully the ideas contained in these concepts can be applied to your plans and make your install easier.

Large building/extreme distance (multiple cams): Traversing large distances due to square footage of buildings is always a concern. You have to consider both voltage and signal drops, as well as cable expense. If you have more than one camera a few hundred feet away, using UTP cable like cat5 be both solve your problems with cabling and voltage drop as well as save you money. Here’s the idea: Consider using a balun hub (for neatness and organization). Simply run small coaxial cable “jumper” wires from the DVR to the hub (4,8, or 16 channel) to bring it video connectivity. Once the balun hub is connected to the DVR, connect your UTP wire(s) to the hub as well. At this point there is no power involved. You will need to find a place to “drop” your UTP lines where you can also plug in a power supply. Once the location is determined, simply place another balun hub and power supply there. At this point you can proceed to “spider” off from new hub point (like the legs of a spider). At this point you can use either Cat 5 single/double camera runs, or even better; you can switch over to siamese cable (or in a pinch, use plug and plays) to create new connections from each camera to the hub and power supply location. The only distance limitations you now need to consider is the distance from the power supply to the camera for voltage drop and the entire distance from DVR to camera (including both UTP and siamese portions) should not exceed about 1000 feet (800 recommended). In the event that you have an even longer run to make, you can use active balun hubs (require power) instead of passive. There are huge distances gained this way. When they are used instead of passive baluns, your considerations are only that the UTP distance between the baluns does not exceed the capabilities of the balun and voltage drop from the power supply. This could feasibly give you a 5500 foot run if planned properly with the correct equipment and in the right circumstances.

Multiple buildings with existing infrastructure: Another common application for UTP baluns and hubs is when you’re dealing with multiple older buildings. This is far more common than you would think. Buildings on the same property often have old wires spanning between them already. Sometimes its old phone lines or network lines, or other wires. You can often take advantage of this situation. I had a customer call once that was designing a system for an auto dealership. There were going to be 8 cameras placed on the used car building. There was a 25-pair UTP wire ran between it and the main building that was previously used for their phone system. We came to decide the best bet was to place a balun hub at either end of the 25-pair and use 8 pairs for cameras. Small jumpers made from RG59 were used to connect the hubs to the DVR. In the used car building they simply added a power supply with the balun hub and
ran siamese cable for the distance to the camera like the example above.

Mass organization to avoid extra cabling and voltage drop: I also like using UTP like cat5 for organizational and bulk voltage drop prevention. Essentially its putting a large hub (like an 8 or 16) at the dvr, and smaller hubs (usually 4s) at power locations centrally located to a group of cameras some distance away. In small designs this makes no sense. But again, for larger plans this makes lots of sense. It allows for less cable to be required, keeps your install organized, and ensures minimal voltage drop. I’ve even seen this concept used to minimize cable required and utilize conduit in place more effectively.

Adding cameras without adding long runs of cable or to an inaccessible area where cameras already exist: Even though baluns are intended to only work on UTP cable, I have heard of people using them on 18-2 and straight bell wire with success. Sometimes its worth trying to make it work. Some examples I’ve seen work myself are: Taking the 18-2 from an existing siamese home run back to the DVR for a camera, and then running a new 18-2 for power locally, Using an old bell wire for a gate system, and using an old run for an air conditioner control. Any pair of wires MIGHT work, but should be tested far in advance of the completion date. Additionally, you should always remember that the best way to complete your install is with new cable that you place yourself. Old wires may have hidden issues you didn’t see or don’t want to contend with.