Did you ever wish you could see at night? Well believe it or not, it’s more common than you might think.

Several security cameras have the ability to see at night or even in complete darkness with the assistance of Infrared. Actually there are a few different types of infrared CCTV cameras. Two of the most popular options are FLIR Cameras, that stands for “Forward Looking Infrared Radiometer” and the more common standard infrared technology used in the majority of today’s consumer based security cameras. 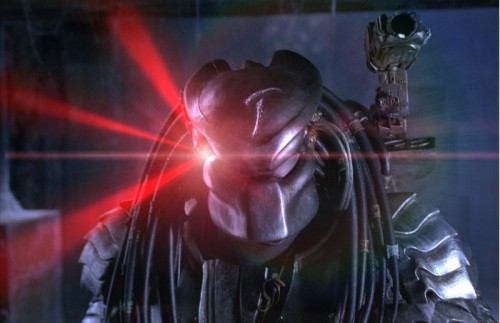 Thermal Imaging & Night Vision
Forward Looking Infrared cameras, sometimes known as thermal cameras, use an array of sensors that can pick up infrared (IR) emissions or detect heat. This is because heat emits IR light. The hotter something is, the more IR it emits. The FLIR camera displays the different levels of heat that it detects as different colors or shades of color.

Anyone who has seen the movie “Predator” might associate FLIR images with the way the predator sees his enemies or prey via his high tech helmet.

FLIR cameras are used for a variety of applications and industries including, but not limited to, law enforcement, military, building & home Inspections, leak detection, commercial & personal security, and hunting & survival.

When it comes to seeing in the dark, FLIR Imaging has many benefits over traditional night vision. Night Vision devices simply magnify the available natural or manmade light in a specific area to brighten an image and help you see in very low light. In many situations there’s still not enough light for the human to see contrast between objects. Everything gives off heat and because thermal cameras see heat instead of light, you can see a lot more contrast between objects. 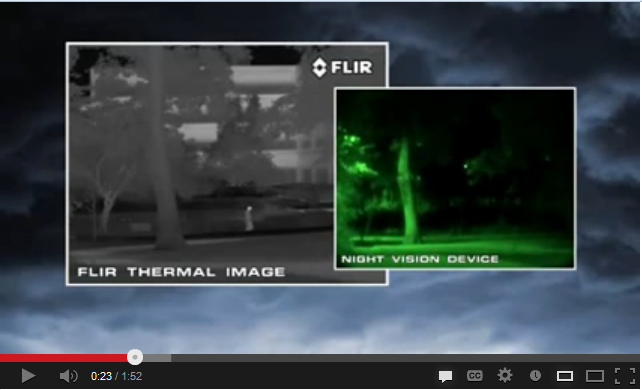 Environmental conditions such as rain, fog or smoke can also displace natural light making it hard to see or completely mask your target when using traditional night vision. This is not the case with thermal imaging.

Here is a great video “Night Vision versus Thermal Imaging” that shows visual examples of these differences.

The Spectrum
As I mentioned before FLIR and the more common types of CCTV cameras use IR or Infrared to see at night.

Take a look at the chart below. Notice the area marked “”Visible Light”, this is the part of the spectrum that is visible to the human eye. 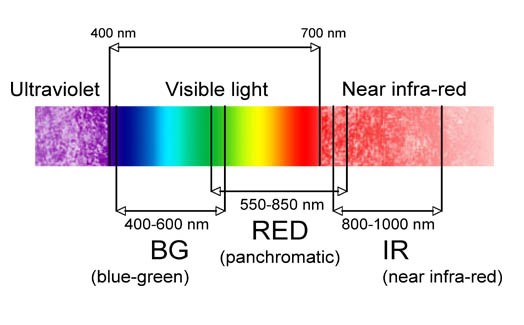 Just to the left of the visible Violet light is Ultra-Violet and to the right of visible red is Infra-RED. Like ultraviolet, infrared is light that is not visible to the human eye. CCTV cameras have a special chip inside that acts as the camera’s eye, but it can see infrared light. That’s why even though we can’t see in the dark, security cameras can.
There are actually different intensities of infrared: near, mid and far infrared. Near-Infrared is just outside the spectrum of red that humans can see. Most commercial security cameras see near-infrared, and like the human eye they can see the light that reflects off of objects. Thermal imaging uses the far-infrared part of the spectrum and can actually see the IR that is produced by heat, not the reflective light. The hotter the object is the more IR it emits.

A Discovery
Infrared light also known as infrared radiation was discovered in the 1800’s by William Herschel. He wanted to measure the temperature for each color of light in the spectrum.

He hung a prism in a window and projected the light spectrum onto a desk. He used a thermometer to measure the temperature of each color. He tested Violet, Blue, Green, Yellow, Orange and Red light. He realized that the temperature increased from violet to red. Then he decided to measure the temperature just outside of the red area where no light was visible. Surprisingly this area was even hotter than the areas were colors could be seen. It proved that there were types of light not visible by the human eye. 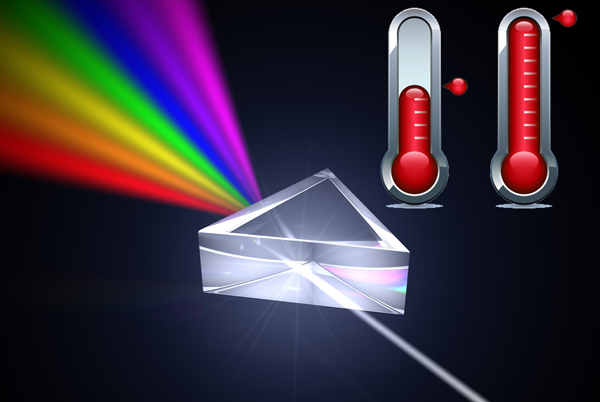 A Question
Question: How do we know that Infra-red light is actually RED? In the light spectrum yellow light has green next to it, so how do we know the color next to red is red? Could it be a color we don’t even have a name for?

Infrared CCTV Camera LED’s
Most security cameras on the market these days use infrared LED’s to produce infrared light. The amount of light produced as well as the distance the camera can see at night depends on the intensity, size, and number of LED’s used for each individual camera. 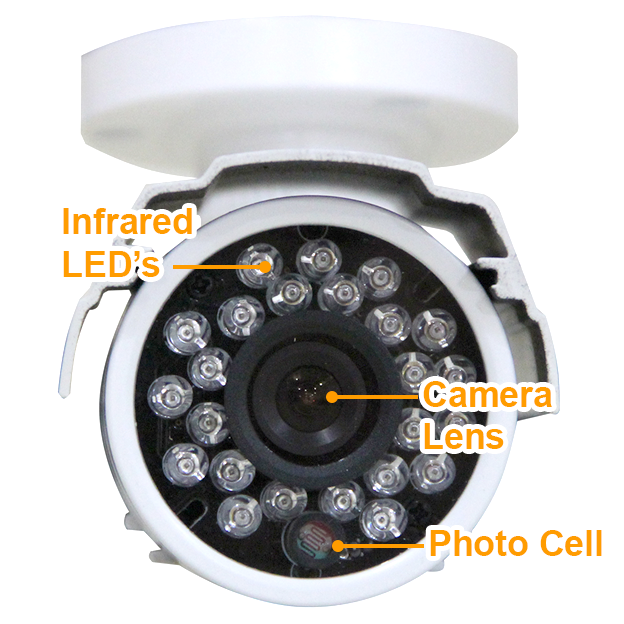 The security cameras also have a built-in photo cell that detects light. When the sounding light levels get too low, the infrared IR’s will turn on automatically.

On some cameras you can actually see the LED’s emitting a slight red glow when the IR’s turn on. Many CCTV installers will test whether or not a camera is getting power by cupping the front of the lens with their hands. By doing this it blocks the light and turns on the IR’s. If you peek into your hands while the IR’s are on and can see the red glow, that lets you know that the camera is getting sufficient power. 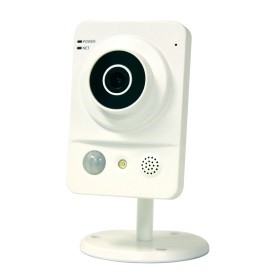 If you have a camera that does not have Infrared IR’s built-in or IR’s that do not have enough power to see the distance you desire, you can use an IR Illuminator. IR Illuminators are basically like big IR flood lights that can be mounted next to the camera, or in any location within the cameras field of view that you want illuminated. Similar to built-in camera IR’s they have a photo cell and will turn the IR’s on and off automatically.

Who’s There?
Some cameras use a more simple approach to be able to see at night.They use a built motion detector. When the camera detects motion a “White Light” or “LED” turns on and illuminates the surrounding area, similar to turning on a very bright flashlight.

Some Interesting Facts
Fact: Some Snakes have special organs that allow them to see Infrared. This enables them to strike their pray precisely regardless of the light conditions.

Pop Culture: In 2002 the video game “Tom Clancy’s Splinter Cell” was released. It featured Sam Fisher, a special agent for the NSA as the main character. It was one of the first video games to encourage the player stay in the shadows, sneak up on their enemies and take them out silently, instead of running out in the open with guns blazing. Ironically 2 of his most powerful weapons were night vision & thermal vision. 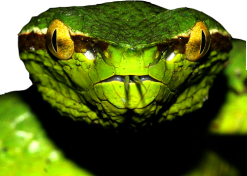 In Conclusion
The next time you find yourself stumbling around in the dark, just remember that how many different types of “Night Vision” there are. Humans have come up with a verity of methods to achieve artificial night vision. Some animals are equipped with biological night vision and it is prevalent in areas such as the military, home security and even in video games.

Implementing thermal imaging surveillance cameras can provide consumers with a powerful proactive security solution that does not share the reactive limitations of other security cameras. Typical CCTV security cameras suffer from false alarms and...

END_OF_DOCUMENT_TOKEN_TO_BE_REPLACED

The whole point of owning a video surveillance system is to successfully protect people, property, and assets from potential threats. However, without the ability to achieve early detection, security cameras remain reactive instead of...

END_OF_DOCUMENT_TOKEN_TO_BE_REPLACED

5 Things to Consider Before Buying a Night Surveillance Camera

Deciding on the best day or night surveillance camera to safely monitor your business or home isn’t as difficult as you think. Though the overall selection of security cameras equipped with night vision capabilities...

END_OF_DOCUMENT_TOKEN_TO_BE_REPLACED

Tired of not being able to see things that go “bump” in the dark? If that’s the case, you need a night vision wireless security camera. These cameras take advantage of the latest technology in digital camera security systems, are easy to install, and are reasonably priced as well.

END_OF_DOCUMENT_TOKEN_TO_BE_REPLACED

What exactly is a 640 x 480 infrared camera? This can be a complicated answer for many reasons. In the following article we will attempt to address some of the characteristics that can make this seemingly simple question so complicated. Specifically, we will briefly discuss infrared technology and the reference to display resolution and how they relate to a 640 x 480 infrared camera.

END_OF_DOCUMENT_TOKEN_TO_BE_REPLACED

What is a LUX Rating?

Security cameras usually have a LUX rating. This LUX rating is the actual available light intensity at which the camera can produce a picture. A LUX, abbreviated lx, is the International System of Units (SI)...