At SecurityCameraKing.com, we test every camera we produce, and then we upload those demos to our Youtube channel. These videos demonstrate what the camera’s view looks like, usually in both light and dark situations. Sometimes we like to have someone walk on camera during the demo, in order to give scale to the video. And that’s where things sometimes get silly.

Several months back, I was frantically scrounging between my mental couch cushions for an inspired idea for an article. Unfortunately, at the time all that was found was a large ball of lint and a Canadian penny. So, as a last ditch effort to meet the deadline, I strung together a bunch of the goofier security camera demo videos we had made earlier that year accompanied by silly descriptions.

Miraculously, and inexplicably it went on to become an award winning article.. and the funniest part about that is.. I’m not kidding.. It won second place for that month for our internal company competition. After that, several other informative and non-silly articles followed that went on to win accolades and good-will from all mankind… articles that actually had good, solid information about the security camera industry… articles that could even educate someone on the topic. The following article will not be one of those.

Then, much like what happened with the first Ghostbusters movie.. there was a deafening cry out from the public for a sequel… to which the parties involved were at first reluctant, because lets be honest.. we’re better than that… But then when our backs were against a wall, we relented and decided to churn out a pleasant but ultimately needless sequel with filler we didn’t end up using in the original.

So here it is… using the remainder of our “funny” security camera demo videos (which we stopped doing because admittedly things got a bit too silly for their own good), starring our intrepid, fearless co-workers Ian and Jose… 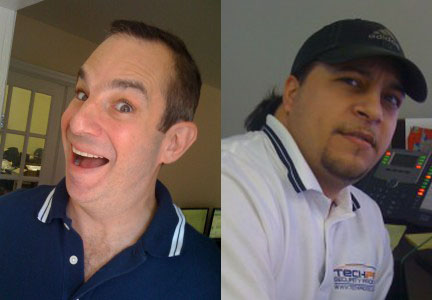 … who between the two of them show have put in several grueling dozen man-minutes into what you’re about to see. Hopefully, now that I’ve exhausted this dubious resource of mild amusement, I’ll be forced to be more clever in thinking of genuine informative security camera industry article content. But in the meantime, enjoy this article equivalent of a Hostess Twinkie.

We apologize in advance for any brain cell loss this may incur.

Our pal Ian is having kind of a bad day. A really bad day. Apparently, someone crossed him real bad… he’s mad as heck and not gonna take this anymore. Luckily, he found a dignified way of dealing with his stress.. to go into the warehouse and throw empty cardboard boxes around in a flailing temper tantrum. After he got that raging beast out of his system, he begrudgingly and shamefully picks up his mess like the big boy that he is. Good for you, Ian, but you’re still grounded for a week.

No, that doesn’t mean we did 3 of these.. it’s a clever reference to the cult classic House Party 3, because in this misguided attempt at humor., two rhythm challenged men attempt to do the Kid n’ Play kick dance. Some things just can’t be unseen. This is one of them.

In this riveting double feature.. Ian sneaks into the warehouse to look at.. something.. on his laptop, then apparently gets busted for it. Then he does a silly Buster Keaton style prat fall over some boxes. Oh, the fun we used to have.

Some people have a tendency to get their head stuck in random places and objects. Not sure if this is a verifiable medical condition, but if it exists, our pal Ian would definitely qualify as part of that peculiar spectrum. In this comedy classic, Ian gets his melon stuck in a box. Possibly because he had seen a viral music video about people who put other parts of their bodies in a box and thought he would start his own viral video phenomenon, which sadly took a tragic turn.

See what I mean? This special fella is always getting his head stuck in objects… often intentionally so. If anyone is aware of a support group for this affliction, email us right away…however, Ian has requested that any recommended group must serve free food and beer with an abv of at least 7%.

And when he’s not busy getting his head stuck in random objects.. he’s getting other body parts stuck in places they don’t belong.

In this video, Ian attempts to halfheartedly recreate the training montage from one of the lesser Rocky movies. That’s pretty much it.. not much more to say about that. Oh yeah, he then picks up a stray PTZ camera and pretends to be Flash Gordon, probably while singing the eponymous Queen song.. we’re not sure.. the camera that recorded this nugget didn’t have a microphone attached.. and we as a species are probably better off for it.

Someday soon, robots will finally get fed up with cleaning our floors and serving us mojitos. They’ll achieve a near Kevin Spacey level of intelligence, then rise up and rule us with their sleek, emotionless titanium fists. But until that day, we can mock them with impunity, so Ian wasted no time in doing his bad robot impression that will surely infuriate our future robot overlords. Though, say what you will.. it’s still far more entertaining than the last few Terminator sequels.

END_OF_DOCUMENT_TOKEN_TO_BE_REPLACED

Here at SecurityCameraKing.com, we make a lot of product and demonstration videos. Most of them are very straightforward unboxing or how-to videos that are generally intended to be factual, informational, educational, and just plain...