Nothing has more “global” access in the digital video security camera industry than an IP (Internet Protocol) security camera.  These cameras use the Internet as the means for their transmissions so anyone with a broadband Internet connection and a computer can access these cameras. The outreach available for use and/or monitoring has been extended even further with the increased technology in cell phones, namely 3G and 4G broadband Internet access.  In the following article we’ll take a look at some Internet security camera systems and how they work.

How a Non-IP Camera System Works

First, let’s make sure we understand how a “non-Internet” security camera system works.   In this type of system, digital video security and surveillance cameras capture video footage and send the video data to the Digital Video Recorder or DVR via a closed circuit made up cable, usually RG-59 coaxial cable or CAT5 Ethernet cable.  There are wireless systems also.

The wireless system consists of an antenna and transmitter built into the camera.  The receiver is usually located near the DVR and is attached to it by the cable mentioned above.  This is still considered a closed circuit television system because even though the camera is transmitting its signal wirelessly in is done on a private, specified frequency.

The DVR stores the video on a hard disk drive (HDD) just like the HDD found in a personal computer.  In addition the DVR may also display the video in real-time (live) on one to several monitors for surveillance purposes.  Some IP security cameras also offer the capability of storing video footage locally on the camera.  A miniature DVR of sorts is built into the camer so that footage can be saved locally on portable memory/storage media such as an SD card.

The digital video camera is responsible for capturing a light image and transforming it into an electronic image.  It does this by using a lens to focus what can be a large field of vision onto a small electronic sensor which usually ranges in size from only 1/4 inch to 1/2 inch square.

One of two different sensor chips is used for this purpose.  They are the Charged Coupled Device or CCD and the Complementary Metal Oxide Semiconductor or CMOS. When light strikes these sensors they emit electrical charges which can be measured and used to create a video image.  The data that is created by these chips is actually analog in form until it passes through an analog-to-digital converter chip.  Another highly specialized electronic chip called a Digital Signal Processor or DSP insures the integrity of the data and may make any corrections that are necessary.

At this point, the camera passes the digital data along to the Digital Video Recorder or DVR whose job is to record the data and store it as mentioned above.  It does this by compressing the file into a fraction of its original size but still managing to maintain a high quality.  It does this by using a COmpression/DECompression or CODEC utility.

How an IP Camera System Works 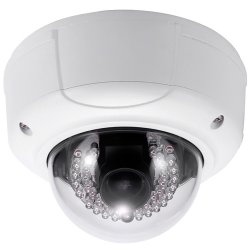 An Internet security camera system is very similar to the above system, however once the data becomes digital, it opens up a whole new world of possibilities, especially including the use of the Internet.  There are basically two types of Internet security camera systems.  One system consists of cameras that are Internet compatible also called Internet Protocol ready or IP ready.  The other system consists of a DVR that has its own Web server technology and is called IP ready as well.

These cameras may direct their video via the Internet to a specific type of DVR that is designed for this purpose which is called a Network Video Recorder or NVR.  One of the advantages of this system is that multiple cameras in multiple locations can be recorded by the NVR.  These locations can be widespread, such as two or more commercial facilities that are located in two different cities.  An Internet security camera system of this type can lend itself to all sorts of networking possibilities.

Another type of Internet security camera system exists where the DVR is the IP ready device and it takes care of all Internet related inquiries.  In this system, the cameras are not IP ready and they send all of their digital data to the DVR.  The DVR then contains its own Web server technology and allows a client access to the system through the DVR.  All of Security Camera King’s featured DVRs have these feature built in to the DVR.

This internet security camera system records the video locally on the DVRs HDD, but it allows a user to control the DVR and in many instances, even the cameras (for example, PTZ movements) remotely.  As a matter of fact, these systems can ever be monitored and controlled using a smartphone and 3G or 4G Internet technology.

Additionally, the IP Camera/DVR can be set up to send alerts if the camera includes (and most do) motion detection.  Specifically, the user can have emails sent to then upon a variety of different triggers.

In addition to using the Internet as the vehicle for delivering the digital data to its final destination, the wireless IP security camera may have the capable of connecting to the Internet wirelessly.  Although non-IP wireless cameras can be wireless as well, their wireless architecture is limited to a couple of different methods while the IP security system has the same wireless architecture but may have a few extra methods that only the IP camera can utilize.

Most wireless non-IP security cameras use a couple of different specific methods for transmitting their data.  Probably one of the most often used methods is the 2.4 or 5.8 GHz transmission method.  Some also use the 900 MHz technology, although as technology increases, there seems to be less of a tendency for using the 9000 MHz technology.

The 2.4 or 5.8 GHz technology boosts ranges possible of up to 5 miles Line Of Sight or LOS.   LOS means that the manufactures specification for range in length is dependent on objects that could impede the signal.  LOS means that the range is directly from camera transmitter to receiver, although this is an ideal situation and seldom does it ever really exist.  As a matter of fact if something does impede the LOS it usually reduces the range but does not entirely disable the wireless signal.  In fact, it usually just decreases the length of the range based on the material involved such as trees, walls, buildings, glass, etc.

As mentioned above, IP cameras use NVRs instead.  Most IP cameras can be located anywhere you want to put them (geographically speaking) and although they are in totally different locations they can all be routed to the NVR via the Internet.  In other words, you may own three small convenient stores in a city.  If each convenient store has IP cameras, their video signals can be sent to somewhere not even connected with the geographical area of the cameras such as a home, home office, or office location.

Wireless camera security systems bring extensive benefits to both residential and business properties. If you have been looking for a professional and highly effective manner of securing your property turning to a wireless camera...

END_OF_DOCUMENT_TOKEN_TO_BE_REPLACED

Security camera software can be though of as the glue that binds together digital video cameras and Personal Computers (PCs) or Macintosh Computers (Macs) as well as Digital Video Recorder (DVR) units for standalone systems. It’s also the heart of remote DVR monitoring applications (Apps) that allows your smartphone to access your video security system. In essence, it provides the programming that allows you to control the camera, monitor the camera, record the digital video files, and maintain and control the DVR.

END_OF_DOCUMENT_TOKEN_TO_BE_REPLACED

One of the more recent digital video security camera system components is the wireless IP security camera. These cameras use the Internet as a network medium for the purpose of transmitting their digital video images and for allowing the user to control the camera remotely. This places the maximum power of remote accessibility as well as easy installation in the hands of the user.