VGA to BNC Converter Boxes: Computer Monitors can be CCTV Displays too 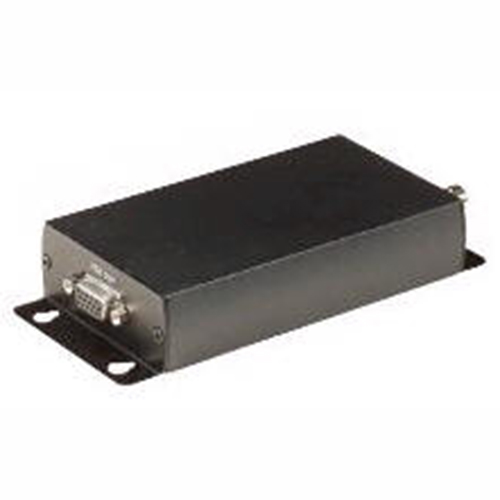 nverter boxes are an excellent way to bring security cameras into the modern era. Surveillance operations are usually carried out on regular television monitors, and much of the video is recorded straight to an analog format like VHS. There are other devices like DVD burners and various types of hard disks that can also be installed to capture video. However, many people would much rather have their security cameras connect to a computer monitor instead of a traditional CCTV system. A VGA to BNC converter might be the best way to accomplish this.

If one was working with video connections that used only RF connectors, or were working with part of a wireless transmission system or anything else that dealt directly with RF energy, connecting two different adapters together wouldn’t be all that difficult. A great deal of camera equipment uses standard 75 ohm coaxial cable with F connectors. F connectors are extremely common for regular consumer television equipment. Sometimes adapters are used to allow twin lead to work with F connectors as well.

If one needed to attach some other sort of coaxial connection to a security camera that used an F connector, they’d only need to find a small metal device that had an adapter for each connection on the ends. There’d be a loss of 1 dB or so, but it wouldn’t be major. Of course, that doesn’t mean that a signal that a piece of equipment was not intended to receive should ever be sent to it. Even if the connectors can be somehow jury-rigged together, it doesn’t necessarily mean that a television monitor is supposed to be receiving that particular type of signal. Doing this incorrectly can cause serious damage to receiving equipment, and it can be dangerous to the person doing the installation work. Always take appropriate precautions and avoid electrical shocks or RF burns.

For instance, a female F connector and a male BNC plug could fit on the same adapter. However, the VGA system is designed to work with computers and it doesn’t involve itself with straight RF. While it’s really helpful to allow security experts to capture video with a computer program, the VGA system isn’t at all useful with standard RF devices. One couldn’t expect an analog CRT television monitor to accept VGA equipment, for instance. That doesn’t mean a VGA to BNC converter is necessarily the right piece of equipment to hook a BNC camera directly to a computer either, since many of them are only designed to allow people to use a computer monitor as a CCTV display unit.

To understand why there are so many different standards in the first place, it might be useful to come to terms with some of the history behind the different types of connectors. This sort of knowledge can also be helpful for those who are working with bringing an older security camera installation up to date. BNC stands for Bayonet Neill-Concelman, though the term Bayonet Node Connector is sometimes uses as an alternative, albeit incorrect definition. It is an RF connector that can work with either 50 ohm or 75 ohm coaxial cable.

Like the name suggests, it twists onto a plug and locks just like a bayonet would have on a firearm. Most signals that have resonate frequencies below 3 GHz and voltages measuring below 500 volts should feel right at home being force through a BNC connector. While most regular television sets don’t have BNC jacks, it really is pretty common in many industries and there is no reason anyone should fear coming across it on security equipment. It is sometimes used for serial digital interface video signals, as well as traditional analog signals. Digital receiving equipment for digital security cameras might very well come with a BNC jack.

The BNC connector is relatively old. The patent for the connector design from which the BNC was descended was granted in 1951, but the design itself dates to 1945. This predates modern surveillance technology, and because of this, the BNC enjoys far reaching market saturation.

That doesn’t mean much if one wants to connect a security camera to a computer, however. Most computer video cards do not ship with BNC jacks. Instead, VGA is the regular standard. The Video Graphics Array (VGA) design was introduced for the IBM PS/2 line of computers in 1987.

During the 1980s, there were a number of different analog computer display systems, but eventually, the VGA won out. If the rest of them had stuck around, connecting security cameras to a computer would be a real pain. When people say VGA in the 21st century, they usually mean the 15-pin D-subminiature VGA connector that is on the end of countless monitors. If people want to connect a security camera to a computer monitor, this is probably the type of plug they will be working with.

RF transmission cable theory is arcane, and the idea of digital to analog display conversion isn’t a topic most people chat about around the water cooler. If one understands the differences in these types of connectors, though, it becomes much easier to make the right choice when buying a VGA to BNC converter. Take a moment to notice that the term here is converter as opposed to adapter. The device actually has to somehow convert signal types since the device is fundamentally working with two different types of signals. This would be like walking into a store in the United States and trying to buy groceries with Japanese Yen. Just like the poor cashier, a display monitor would freak out if given the wrong type of signal. The converter works something like a currency exchange.

A standard and relatively inexpensive BNC to VGA converter is what one would want to use if they wanted to turn an LCD or CRT VGA computer display monitor into a CCTV spot monitor. There are some more advanced models on the market though that sport features like S-video inputs, image freeze systems and the ability to change up different resolutions. Standard output resolutions for many types of computer monitors include: 1024 x 768 @ 60 Hz, 800 x 600 @ 75 Hz, 800 x 600 @ 60 Hz. Keep in mind that trying to force a monitor to display something outside of its intended resolution can cause some strange things to happen. One could even cause serious damage to a display screen. While security cameras are intended to nab crooks that can be turned into crooks themselves that damage expensive equipment.

Some surveillance DVR machines also have BNC connectors. This sort of converter box is an excellent way to hook a new wide screen LCD monitor into a DVR machine. In fact, this might be seen as vastly more economical than using a computer to actually capture video, as well as more energy efficient. Considering the difficulty in actually getting analog security camera equipment to interface with digital computer inputs, it could be a viable option for those who don’t want to dirty their hands.

Before anyone invests in VGA to BNC converter boxes, though, they should be sure that they’re not actually working with RCA plugs. These are the standby for so many types of video devices. They’re extremely popular for video game units, but that doesn’t mean that they don’t show up all the time in the surveillance camera industry as well. Admittedly, most standard surveillance equipment uses BNC, and the BNC connector once again enjoys a wide share of the market because it is such an old and trusted connector. Nevertheless, the RCA jack is no spring chicken. Some people who are not otherwise familiar with video equipment might easily confuse the two types of plugs. This can be an expensive mistake when buying a converter unit that can cost around $50.

With that in mind, one of the major reasons to buy a device to convert between VGA and BNC is actually cost. Most regular television sets do not have BNC jacks. Purchasing CCTV monitors that do have BNC jacks right on them can be expensive. While there are VCR and DVR units that sport a BNC port, these aren’t necessarily that useful if someone is trying to actually watch suspicious activity as it happens. Computer monitors are much less expensive, and eventually, all devices do go bad. A computer monitor will cost less to replace than a CCTV monitor, since the converter box shouldn’t wear out if treated properly.

Some people get ambitious, though. They really want to experiment with different technologies. For them, they could connect the converter to the VGA port on certain types of television sets, or they might even use a secondary VGA to DVI machine to connect the surveillance network to the DVI port on a television set. Besides being a source of pride for RF engineers, this sort of system allows one to check cameras from different inputs on the television with the remote. While picture-in-picture systems have their faults, one could also use one with this system to watch two different cameras on one screen at the same time.

If one really has to connect the BNC cable from a CCTV camera to a PC, they should be warned of the quality loss that happens when converting analog signals to digital ones. However, it could be worth it because a computer can be used to view camera feeds remotely, record footage for long periods of time and burn DVDs and VCDs of CCTV footage right from the computer’s burner.

The converter boxes that allow VGA and BNC interfaces to work together can be a viable option in this case, but it isn’t the only way to get CCTV cameras to work with computers. While there are alternatives, many people might want to just deal with the quality loss and use a BNC to VGA converter system. It is considerably easier, especially if people want to avoid having to invest in a great deal of new equipment. Still, there is some merit in going over the alternatives.

One additional method is to use a USB interface. A wireless receiver and transmitter can be wired to the BNC port, on one end, and the USB interface, on the other. This has the advantage of not using any cables, but it really isn’t an option for areas where an existing installation has left engineers with a length of cable in the walls. While one could theoretically just ignore this, it really does seem like a waste, and wireless installations are subject to radio frequency interference from other devices. Naturally, several cameras installed in this manner could potentially interfere with one another.

The other method involves installing new hardware into a PC body. One could acquire a BNC video capture card and configure it to work with the computer in an empty motherboard slot. It eliminates the need for external converter boxes and additional cables. For those who are technically inclined to install computer hardware, this might be the best alternative to a BNC/VGA converter box. Of course, if the drawbacks aren’t a problem in one’s particular installation, it might be best to not rock the boat. A VGA to BNC converter will work just fine for most people.

Since CCTV systems usually work with BNC jacks, a VGA to BNC converter box can be quite useful. Considering the fact that modern monitors and television sets have many options, a creative solution to individual problems can be manufactured. Engineers shouldn’t be afraid to mess around with different designs, but basic safety precautions need to be kept in mind. Remember that the VGA and BNC interfaces are fundamentally different things. One wouldn’t try to buy groceries with Yen outside of Japan, would they? Likewise, analog computer interfaces don’t want to directly receive a strange RF signal that they don’t know how to deal with. One should also keep in mind that if anyone tries to work with wireless technology, they could potentially cause interference.