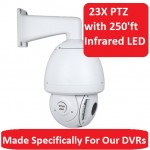 Surveillance cameras have been in use for decades to deter crime and to capture video evidence to be used in the prosecution of crimes. However, criminals are aware of surveillance cameras and continually attempt to circumvent them, by various means. Taking advantage of human behavior is one way criminals avoid being filmed in a criminal act. Security guards and even homeowners cannot be everywhere at once. Therefore, many surveillance systems are unattended, in other words, the cameras videotape without the benefit of human analysis. The crimes and actions of others are being recorded and preserved, but the acts in some cases are only detected after the fact. However, new technology has once again caught up with the demand. New technology shows us how to benefit from an auto-tracking PTZ. PTZ is an acronym used to describe cameras that can pan, tilt and zoom.

Auto tracking is simply a camera’s ability to detect and focus on a particular object. Typically, the camera will have firmware installed that can be programmed to eliminate unnecessary recordings. You as an operator can program the camera to focus on and track objects of a particular size and shape such as humans, cars or even animals. Subsequently, you can eliminate any object based on size or shape. This is ideal when you want surveillance of foot traffic in or out of a building that is situated along a street because, you can program the camera not to record vehicles driving by.

How to Benefit From an Auto-Tracking PTZ

Less real time, monitoring is required when utilizing an auto-tracking camera. You can be assured the camera is capturing everything in its view that is considered relevant to the surveillance operation. Endless hours of editing have been eliminated, thus reducing labor costs. The cameras can be manually operated, as well, if the situation becomes fluid and additional coverage is required. Human operators can take over if the focus of the surveillance changes abruptly. Once the situation is under control, the camera will automatically go back to its programmed surveillance parameters.

Traditional PTZ cameras, while highly effective, do have several weak points. Criminals, in some cases, can trick a motion-activated camera by tossing a ball or waving a branch to move the camera to a different field of view. Although flush mounted PTZ cameras are hard to avoid it can be accomplished with some effort. Auto tracking cameras can be programmed to ignore, small objects placed in their view. In other words, the camera cannot be tricked in moving its lens view to follow a ball or branch. It will however, begin tracking a human sized object, and will automatically focus its lens for the sharpest view, when properly programmed. Once a target has been acquired and the object meets the programmed parameters the camera will record and follow that object. Once a target is locked on, the camera can be programmed to send an alert to the operator, as well. Multiple auto tracking cameras with an alert capability can be monitored very effectively by one operator.

Traditional PTZ cameras many times have an alert system that notifies the operator when movement is detected. Subsequently, this leads to false triggers because, the camera cannot be programmed to ignore certain objects, such as swaying branches or blown debris. An operator once alerted must then monitor the cameras for the intrusion. This forces the operator to search for the cause of the alarm, taking up valuable time. Auto tracking cameras with programmable firmware only alert the operator when an object meets the pre-established requirements.

Where to locate An Auto-Tracking PTZ

In addition to its other features, many auto-tracking cameras can be programmed to ignore certain areas in its field of view. This ensures that the surveillance operation does not inadvertently record certain activities. For example, homeowners and businesses alike need to be aware that recording certain people or actions may be in violation of privacy laws. The cameras can be pre-set to avoid certain areas such as a neighbor’s home or property. Homeowners can position cameras to track an individual or vehicle as it enters their property. The auto focus can also capture license plate numbers if the cameras are used to monitor access in and out of a gated community. Businesses can use the cameras to monitor choke points in and out of their facility as well as loading docks, and parking lots. Access to most industrial complexes is in two stages. The first stage is where employees enter in their vehicles to park, and then they may be required to enter a screening area on foot. Cameras can be positioned to detect anyone enter the parking lot on foot while ignoring the vehicle traffic.

Complexes with a higher degree of security may have what is called a sally port. A sally port allows access from one side while securing total access by another barrier typically a fence. Once entered from one-side vehicles and individuals can be screened for any anomalies, before complete access is granted. Programmable cameras can be positioned to screen for such things as more than one person or vehicle entering at the same time. Certain model cameras also allow the operator to program distance, speed of an object, shape, level of zoom and size of the object. These features allow an operator to identify anything out of the ordinary, very quickly, without having to monitor multiple cameras. Humans carrying backpacks and even objects in their hands can trigger an alarm.

Secure areas in some cases do not allow objects to be carried in or out of the facility. In the past, each individual entering or leaving would need to be inspected by a security guard. Once the human size and shape is programmed, a briefcase or duffle bag or any object that interrupts that shape will trigger an alarm. This greatly increases efficiency and enhances the facility’s security. One security guard can now monitor multiple points where in the past each area required its own.

Auto-tracking cameras can estimate the size and distance of any object, which can greatly benefit homeowners. Owners can program their cameras to ignore small objects such as pets and alert the owners to the movement of their children. Perimeter cameras can ignore animals that enter the camera’s view and only focus on individuals and even vehicles. Ranchers can keep track of livestock without getting false triggers caused by smaller animals, as well. Several camera models are standalone systems that can be left in place for extended periods. The camera systems can communicate using cellular service to send emails and status updates. The cameras can be programmed to cover 360 degrees or only cover pre-established viewing angles.

Law enforcement has used surveillance cameras since the early 1970’s. The cameras main purpose when first introduced was to deter crime in public areas. The cameras also recorded criminals in the act, which aided in their identification and subsequent prosecution. With today’s technology, law enforcement can now conduct surveillance operations on a wider scale, while reducing the number of personnel needed. Certain so-called smart cameras can also identify individuals based on the color of their clothes, body size and many systems can be used in conjunction with facial recognition software, as well. Several models of auto-tracking cameras can be programmed to identify individuals in a crowd, and once identified, the camera will focus on and track the subject. These types of cameras can identify individuals even if they have attempted to disguise themselves. Studies have concluded that a person’s gait or style of walking is unique to them. This allows the cameras to identify individuals even when facial recognition is not feasible or possible.

Cameras that can be programmed to identify and focus on objects based on size and shape, are ideal for any institution that cares for children. Camera systems can be positioned to identify adult sized humans when they enter the premises. In this type of environment, it is recommended that you employ multiple cameras. One camera would be used to identify larger persons as they move about and another to keep track of the children. The cameras can also be used to monitor play areas, in particular outdoors. The perimeter of any playground is particularly important and there should be cameras positioned and programmed to alert the staff of anyone in the area. Auto-tracking cameras can be programmed to provide the size of an individual and the distance away, to help law enforcement, in any future investigation.

Schools can employ auto-tracking cameras to alert the staff about anyone entering the grounds and to help determine their size and if they may have a backpack on or are carrying an object in their hands. The camera’s parameters must be carefully programmed to prevent false alarms however. The cameras can also be set to ignore certain areas to maintain privacy. Keep in mind that blocking certain views may leave the institution vulnerable if becomes common knowledge. Once again, the perimeter is important when positioning security cameras. The cameras can be placed inside the building and even in individual rooms. The cameras can be used to alert staff about children wandering the hallways or of persons in areas that would normally be unoccupied.

Auto-tracking cameras will enhance any security protocol. The cameras can be used at night, as well as, in rooms without any light source at all. The systems can be wireless, or hardwired, and the number of cameras is determined by the equipment and security needs. Auto-tracking cameras can be used to enhance a current camera system without upgrading monitors or digital video.

Do not hesitate to ask any questions and contact us.

Best IP Camera System Security Camera King is a leader in the industry, we often get asked "What is the best IP Camera system out there?" It's a tough question, but an important one. The reason...

END_OF_DOCUMENT_TOKEN_TO_BE_REPLACED

8 Megapixel CCTV Cameras Security Camera King carries a wide range of amazing CCTV equipment, but did you know we carry 8 Megapixel CCTV cameras in both IP and COAX? The dominant resolution in CCTV for...

END_OF_DOCUMENT_TOKEN_TO_BE_REPLACED

CCTV for Commercial Locations Security Camera King is an online retailer which provides top end CCTV for commercial Locations, and Residential as well. CCTV technology is utilized in many ways, some of which are more important...

END_OF_DOCUMENT_TOKEN_TO_BE_REPLACED

Full CCTV System Want to create a full CCTV system? Security Camera King's online  store sells everything you need. We even carry package deals. When we talk about complete security, what we mean is of course...

END_OF_DOCUMENT_TOKEN_TO_BE_REPLACED

Digital Vs Optical Zoom Security Camera king carries CCTV cameras of many types, and we know sometimes it can get confusing the difference between digital vs optical zoom. Lets talk first about what types of cameras...