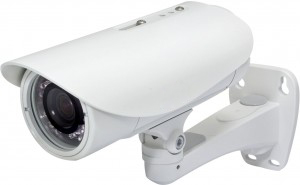 As I learn more about CCTV Cameras, DVR’s and NVR’s, I find that understanding the terminology referring to resolutions and how they apply to viewing, recording and streaming is a bit complicated for some people.

For the purpose of this article I will try to keep things fairly simple. Although most of this information applies to CCTV cameras, DVR’s and NVR’s in general, I will be referring to TechPro Security Products capabilities and specifications specifically.

First, I think it is important to understand that acronym’s such as CIF, D1, 960H and 2 Megapixel all correlate to a resolution. Below are some examples:

Ok now let’s talk about analog CCTV cameras and DVR’s. First understand that in some cases the camera itself can capture a much higher resolution image then is being sent to the DVR. This is mostly due to the limitations on the amount of data that can be sent across long distances of analog cable and the DVR itself, although advancements have been made in regards to our HD SDI cameras and DVR’s that will allow 1 and 2 megapixel resolutions to be used in conjunction with analog cables.

That being said our most popular DVR’s will record and play back stored video at D1-30fps or a resolution of 704 x 480 at 30 frames per second. It is worth mentioning that the lower the frames per second, the choppier or more jumpy the video will look on playback. 30 frames per second will result in a very smooth video but will utilize more hard drive space.

The combination of the recorded resolution and frames per second determine how much hard drive space will be needed. For example, if you recorded 1 camera at D1 30 frames per second, 24 hours a day / 7 days a week you would need approximately 90 gigabytes of disk space. If you drop the frame rate to 7 frames a second you only need about 20 gigabytes of space.

Keep in mind, other factors play a part in how much disc space will be needed, such as number of cameras, video quality, the video compression that is used and so on. You can use our CCTV Hard Drive Calculator and try different combinations to achieve a better video quality and maximize your disc usage.

Ok so you might be asking yourself why would anyone want to record CIF 352px x 240px? Well you probably wouldn’t but our DVR’s have a 2nd video stream that is used for remote viewing, so you can view your security cameras from any remote location where you have an internet connection and a computer, iPhone, Android Phone, iPad or Android tablet. Delivering that video to you in the lower CIF resolution ensures a faster, smoother playback.

Please have a look at the image below to give you an idea of the different sizes of each resolution as compared to a standard 16:9 Monitor. 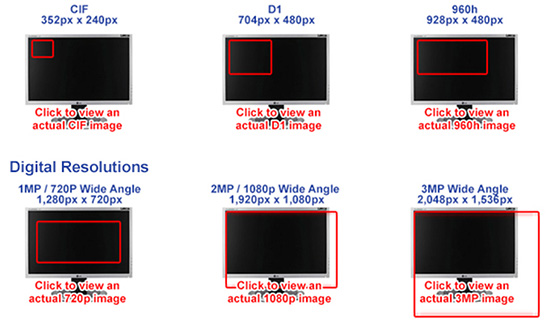 HOW ironic you can’t use a Digital Video Recorder (DVR) when the video signal is being transferred digitally.

Using our Network IP cameras with one of our NVR’s gives you that ability to record and playback very high quality video. In contrast to a traditional DVR were all of your video cables for each camera plug directly into the back of the DVR and are powered by a separate power cable, Network IP cameras use CAT 5 or CAT6 cables that all run to a switch and that switch is the only thing plugged into the NVR. If you are using a POE Switch (Power Over Ethernet) you can also power the cameras with the same cable.

One thing to keep in mind when going with Network IP cameras and an NVR is that each camera and the NVR itself are all seen as a device on your network and may impact your network and internet speeds.

Hybrid DVR/NVR Systems Let’s say you have an existing analog system but would like to start adding some Network IP Cameras. No problem, that’s where the TechPro Security Products Hybrid DVR/NVR’s come in to play. Our Hybrids give you the best of both worlds. Our 16 Channel Hybrids for example will allow you to connect 16 analog cameras and up to 16 Network IP cameras for a total of 32 channels.

Lastly, here are some of the most common CCTV acronyms and basic meanings.

Our company, SecuirtyCameraKing.com, has been doing a considerable amount of business with Washington State’s I-502 applicants, and it has been a very beneficial relationship for both parties. Once these customers send us a floor...