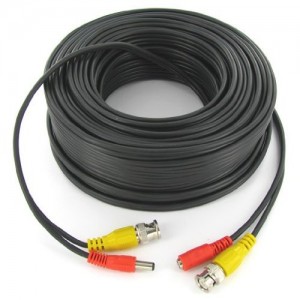 Coaxial cables are composed of a copper wire conductor that is encompassed in a non-conducting jacket, which is often referred to as a dielectric. The dielectric will typically be encased in a layering of copper or aluminum shielding. This layer of shielding is then protected by an exterior jacket. On either end of the cable there will be a BNC connector that is screwed in to bring the whole thing together. You will typically find that a closed circuit television system will need a cable that can produce an impedance rating of 75 ohms. There are a lot of different sizes for the cable, which will all be designated by various Radio Guide numbers. Depending on the distance the signal is going to travel, you may need a higher Radio Guide rating for the system to operate effectively.

If you have a remote installation performed, you may notice that the closed circuit television cables are also going to need to carry video signals beyond just the electrical power required. If you need to have video signals, you should try and see what Siamese cabling can do for you. You will normally see Siamese cabling with a Radio Guide rating of 59. It will also include a coaxial cable and a duo of stranded power lines to help with the transmission of power. On each end of the coaxial cable there will be BNC connectors. The opposite ends of the stranded duo will be equipped with the male and female DC power adapters.

If you are going to have a camera cable that is going to end at the monitor or recording device with an RCA input, you should try using a three-wired RCA cables. An RCA cable will feature a white conductor, which is used to transmit the audio portion, and a yellow connector, which is used for the transmission of the video channels. You may also find an RCA cable that has an integrated DC power line, including the male and female plugs on opposite ends in red. It has been stated that the RCA cables are not as shielded as their coaxial counterparts. You should only use them for a short run, or if you are in an area that has a relatively low radio-frequency noise level.

There are some cameras that will require either a four or a six pin lead in their cables, which are also referred to as a DIN cable. DIN cables will typically end with a round plug that has either four or six pins that are distributed around the area in a circular shaped pattern. These pins are responsible for carrying the DC voltage. However, they are also responsible for getting the output and audio input signals, alarm signals and the video signals to where they need to go. If you need something that is simple to install, a DIN cable is the perfect opportunity for you to use in any two-way audio communication needs. Remote security systems are perfect for use with a DIN cable.

Hooking Up DIN Closed Circuit Television to Your Computer 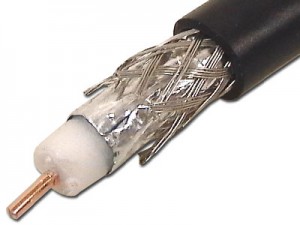 1. From the base of your camera you are going to need to run the closed circuit television DIN wire into a location near your computer.

2. Using the six pin connector you are going to plug your camera’s DIN connection cable into the six pin DIN adapter that is designed for female to female connections. You can normally find these adapters at any local electronics stores or through the manufacturer of your closed circuit television.

3. Take the opposite end of the female to female adapter and run it into the male end of the DIN to USB adapter. You are also going to need a six pin connection to make the whole setup work properly.

5. Power on your computer and let the operating system boot up. Do not try to open any programs or plug anything into your computer’s USB ports until after the system is completely powered up.

6. Take the USB end of your DIN adapter and connect it into the USB port located on your computer.

7. Once you see a message come up on your computer that tells you that it has found new hardware you will be able to click on this message and use the wizard to help guide you through the process of identifying the hardware.

8. Click on the button that says next and wait for the computer to go through and search for all of the required information.

9. When you see the message that appears that says generic USB camera you will simply click on the button that says ok.

10. Click on the icon for my computer and you are going to see the camera on your list of available devices. You will be able to use this camera for streaming, recording and viewing video from your closed circuit television camera just like you would a webcam.

If you are planning on sending your video signal to a computer monitor, you are going to want to use a VGA extension cable. At the end of these 15 lead cables you will find a D shaped plug that will have either a male of a female connector. On either side of the VGA cable you will notice that there are thumb screws, which will connect with the threaded nuts located on the equipment to help provide you with a secure connection. VGA cables are commonly used with connecting computer equipment largely in part because they are protected against any of the electromagnetic interference that is normally generated by processor chips. 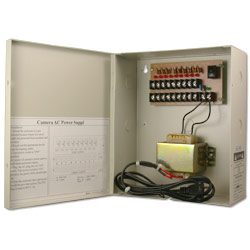 You will commonly find a closed circuit television camera being associated with security cameras. Security cameras will be able to capture the video and then transmit it over to the recording medium and monitoring station. When you connect the closed circuit television camera through a television it is only going to require a coaxial cable or an RCA connection to run everything from the camera and into the television. You can purchase either one of these cables at just about any electronics store for a relatively inexpensive price.

Instructions for Connecting Your System

1. Take the time to go through and determine what type of connections you are going to need for your closed circuit television camera. Your television should have both coaxial and RCA inputs, but at the bare minimum it is going to have at least one of the connections. It is more than likely that your closed circuit television camera is going to have both of the inputs available to you. Take a look at the back of your camera and see what ports it has for you to choose from.

3. Purchase your choice of either the coaxial cable or an RCA cable. Make sure that you have a long enough cable purchased to be able to connect everything properly. You will be able to get these cables at just about any of the electronics stores in your area.

5. Run your cables from the rear of the closed circuit television into the television.

6. Take the cable and connect it to your television input ports. If you are using a coaxial cable, it will be screwed into the television. Whereas, if you are using the RCA cables, you will simply be matching the colors into their appropriate ports. Once you turn on the television you should be able to see all of the live feed coming in from your closed circuit television camera. Your television may need to be turned to a different video input or channel to be able to receive the connection. However, this is all going to be dependent on the specific make and model of the television set in question. Contact Security Camera Kings today for your CCTV cable needs.

What Are the Benefits of Using Infrared Technology? The basic rule for any security system is that if there is no light, there is no picture. The important thing to understand is how infrared illumination...

END_OF_DOCUMENT_TOKEN_TO_BE_REPLACED

CCTV cameras are made in a variety of types and for a wide range of uses. Complicating the selection of cameras more are the variety of technologies within each category type.

In order to understand the range of cameras available to the general market, and useful for ordinary consumer applications, this article is divided into three sections: camera types, lenses, and technology types.

END_OF_DOCUMENT_TOKEN_TO_BE_REPLACED

If you are looking for a security and monitoring system that can be viewed away from the site where it is being used you should consider using a CCTV camera remotely monitored. These systems are useful for monitoring the home from work, the business while at home, or for any monitoring application where the user is not in the same location as the camera.

END_OF_DOCUMENT_TOKEN_TO_BE_REPLACED

An autofocus CCTV or Closed Circuit Television camera is an ideal choice for surveillance and monitoring when the field of view encompasses large differences in distances of the target or the target is moving and often changes its distance to the camera. Most autofocus CCTV camera lenses are zoom lenses; a variation of this type of lens is a vari-focal lens which can vary its focal length by manual adjustment.

END_OF_DOCUMENT_TOKEN_TO_BE_REPLACED

Innovative technological improvements have made it easier than ever to make your CCTV camera remotely monitored. There are basically two types of Closed Circuit Television (CCTV) cameras, analog and digital; and both can be installed for remote monitoring.