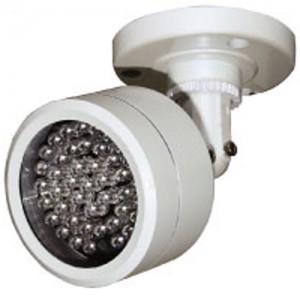 Light Up the Night with an Outdoor IR Illuminator

People who aren’t otherwise familiar with infrared technology might not have any idea what an outdoor IR illuminator is good for. It helps to have a good working knowledge of why infrared surveillance devices work they way they do. People who aren’t as knowledgeable about this area of surveillance might make a few mistakes when purchasing an outdoor IR illuminator device.

That’s nothing to be ashamed about. Infrared light is a very abstract concept. It is defined, essentially, as electromagnetic radiation that has a wavelength longer than that of visible light but shorter than that of what conventional thinking would define as radio energy. Many individuals would think of infrared as heat, and this isn’t too far off. Most thermal radiation that objects near room temperature give off is essentially infrared energy. This sort of energy is exactly the type that IR CCTV camera systems are concerned with. For that matter, most of the sun’s light is infrared. At sea level when the sun is at its zenith, the sun’s energy is just around 1 kilowatt per square meter. 32 watts of this power is UV and 445 watts is visible sunlight. That leaves a whopping 527 watts of infrared radiation. This is precisely why it is often hazardous to use night vision equipment during the day.

At night, however, the infrared spectrum can be an excellent way to capture images or video when working with surveillance cameras. The human body, at a normal temperature, radiates wavelengths around 12 micrometers. This is bad news for anyone who is trying to commit a crime at a facility that is protected by infrared CCTV technology. However, this isn’t always enough to provide evidence. In some situations, the image might be seriously blurry. Depending on the ambient temperature outside, the surrounding energy emissions might be too dark or too bright to capture an adequate image. This is where an outdoor IR illuminator comes into play.

When working indoors, climate control systems usually keep the temperature within a healthy range. If not, buildings are naturally insulated. Even without extra insulation, a furnace or an air conditioner, indoor temperatures are a lot different than those outside. Exterior temperatures are extremely variable, and they’re also just as extremely difficult to predict. Think about weather forecasting, for instance. When was the last time that a forecast was entirely accurate? Most likely, it never has been. That’s largely because the climate is so difficult to predict. These minute changes and numerous variables are the reason that outdoor IR illuminator devices are installed as part of an IR setup. The outdoor IR illuminator can help to keep things within a more constant range, so that the images captured will be much better than usual.

Granted, that being said, there’s no reason that an outdoor IR illuminator couldn’t be used indoors if it’s designed for both climates. There are indoor situations in which the capture of infrared imagery is disappointing. The illuminator box might be thought of as a flash on a camera in this respect, since it helps the image to show up by providing an addition light source. However, unlike a flash bulb, it stays on constantly. To facilitate this, LED technology or some other solid-state lighting source is generally used. This also helps to keep the amount of electricity used down, considering that the lumens emitted for each watt of electricity is quite high from a solid-state source. The energy consumption can be as low as a few watts, and it seems to be usually around 6-18 watts. This shouldn’t be too much to handle for most businesses, and probably is much lower than most things currently plugged into the outlets of a facility that needs this type of surveillance. To give a bit of reference, many regular FM radio receivers are somewhere around 12-20 watts.

The technology in question isn’t like normal fluorescent, incandescent or halogen light bulbs. For that matter, the light emitted isn’t either, though most light sources give off a bit of incidental infrared energy, but it usually can’t be seen. That being said, people should never stare directly into an outdoor IR illuminator box. While infrared energy isn’t dangerous, it is still not advisable to expose the eyes to any excess radiation.

There might be some people who balk at the term radiation, but it is being used in the same sense that radio waves and visible light are radiation. The radiation from radioisotope materials, like atomic fuels, comprises ionizing radiation. This is something completely different than the place in the electromagnetic spectrum that these devices occupy. Infrared radiation is safe, and indeed, the human body gives it off. That’s how IR surveillance works in the first place. Keeping the safety guidelines about looking into the machine is a generally good idea, nevertheless.

Now, on the topic of infrared visibility, there are those that can see some forms of infrared energy. Under most conditions, people shouldn’t be able to see IR light. Moreover, using such technology shouldn’t ever interfere with normal day-to-day business practices. If one is using an outdoor IR illuminator that projects light at around 850 nM, then people might occasionally see a dull red glow if they stare directly at the box. No one should be doing this anyways, but it shouldn’t’ cause too much alarm. This device is still functioning normally, and it simply emits a bit of energy that is somewhere around the bottom of the visible spectrum for the human eye. Once again, though, anyone staring into these boxes should stop. It is not acceptable procedure to continue to look into one, even though the energy isn’t coherent for a very large distance around it.

Sometimes, there are applications that require complete invisibility. For those types of situations, a 940 nM outdoor IR illuminator should be sufficient to prevent anyone from seeing the same type of glow. This is ideal for applications where there is a serious concern that criminals could actually be able to tell that an illumination unit was being used. Not being able to see the outdoor IR illuminator means that they might be more inconspicuous to the fact that one’s video cameras are working so well.

Most of these illuminators use AC adapters, or some other power cord, to receive power. If this is compromised, the unit can die. When an outdoor IR illuminator is mounted, it’s generally done on a wall or under the eaves of a building. A hole should be drilled for the power cord, and it can usually be installed in such a way where the cord isn’t even seen. When it’s not seen, it’s not exposed to the elements. Hiding the cord in this way might also score some aesthetic points with designers. Few people want to see a black piece of plastic sitting around in the eaves of a building. It can also be seen as more secure, since some sophisticated criminals might try to go after the surveillance equipment when they’re trying to find a site. Any cord that was present could easily be cut, and this could severely compromise an infrared monitoring site that relied on the device to bring it up to speed.

Take a look at the case that the system comes equipped with. Plastic case that are included with some models makes them suitable only for indoor applications or protected uses outside, but there are more seriously robust options available for those who need them in rough climates. Remember to shield plastic cases from the harmful effects of ultraviolet light. It is perhaps ironic that light from the sun can damage something that’s supposed to be providing a type of light when the sun isn’t out and shining.

When mounting an outdoor IR illuminator unit, one should be sure to take a look at the weight. A very heavy unit that’s suspended from a ceiling or rooftop might eventually break free of its moorings. However, it really is quite fortunate that modern solid-state technology makes these devices so light. Nevertheless, the size and weight should be checked beforehand to ensure that disappointment doesn’t set in later on.

Beam spread is a bit of a more esoteric metric to judge different outdoor IR illuminator devices by, but it might be familiar to those that have worked with surveillance cameras previously. An arc defines the area around the unit that is covered by the infrared light it provides. This might sound a bit difficult to understand at first, but it really isn’t that hard. If one held up a light bulb, there would be a sphere of light that surrounded it. What’s being measured is essentially the area that this ball makes up.

If that’s still confusing, the effective illumination range should be a lot more concrete. This simply refers to how far one needs to go before they can no longer be painted with infrared light from the device. The larger this number, the more effective the device is at long ranges. Naturally, there are many variables the influence the actual range beyond simple manufacturer specifications. Weather conditions and such are one of the more understandable facets of this equation though. On a clear night, with proper mounting, the specified range should be a good guideline nevertheless. For those who are truly concerned, they might want to take a measurement of various distances around the point that they install the outdoor IR illuminator at. Points could be temporarily marked on the ground to show where the effective range of the camera starts to peter out. Granted, these marks shouldn’t be permanent, since that would give extra information to would-be criminals.

It is important to remember that illumination at the fringe isn’t as strong as the bright illumination that comes to objects that are directly in view of the device. This shouldn’t be too much of a problem however. Any suspicious activity would probably start in the fringe area, but more than likely move towards the area under direct surveillance. If a parking lot is being watched, for instance, it’s probably most important to capture video of the area closest to the building that the parking lot serves.

Of course, an outdoor IR illuminator’s effective range is only ever as good as the effective range of the infrared camera that it’s paired with. Anyone who is seriously concerned about range should probably look to the camera before the outdoor IR illuminator box. After the camera is fully checked out, then they can progress to the illuminator. However, people should probably shop for a camera with a good range in the first place while keeping the tradeoffs in sharpness and image quality in mind. Different types of security cameras are going to have different properties to begin with. It probably sounds very silly to say that potential consumers need to do research to ensure that their equipment choices are going to work together, but it really is true. It would be most unfortunate to buy an outdoor IR illuminator, and then find out that one has been working with a camera designed to capture visible light the entire time.

Infrared surveillance can work in scenarios that involve monitoring an area in almost total darkness, and in fact, well-designed systems can work without any visible light. This has made them quite popular for those hard to reach places, so to speak. With the appropriate application of an outdoor IR illuminator, these cameras can become even more useful. While there might be a few bugs to work out at first, once everything’s set, LED technology should ensure that the system is maintenance free for years to come.