Where to Mount Security Cameras

First, let’s break down just how and where to mount your cameras. It’s important to note that everything single environment and setting is different. There is no one-size-fits-all answer that covers every possible layout or scenario. However, there are some general factors that apply to most common settings that should prove to be helpful.

Let’s go over where to put security cameras for residential surveillance systems to begin. These placements are fairly simple to understand and achieve. When placing a security camera to monitor a doorway, the camera placement should be within about 5 feet for utilizing facial identification. On the outer parts of the house, the most ideal placements for home security cameras are on the corners with views that intersect.

Placing the cameras in this way allows for double coverage in vulnerable areas, such as individuals approaching from a back alley, avenue, and common foot traffic traveling on or to doors, windows, driveways, and sidewalks. This also provides a contingency plan for such scenarios as a car in the driveway blocking the field of view from the front walkway for one of the outdoor cameras.

Below is an example outlining where to put security cameras in this fashion using a common house design. 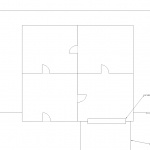 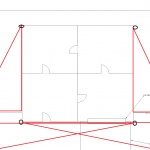 As you can see, by overlapping the camera views, the cameras have double coverage over the garage and front door. It’s also important to note that the majority of fixed lens cameras have much wider viewing angles than the simple illustration presents.

Next, let’s cover where to put security cameras to achieve the proper viewing angle. Again, every scenario and setting varies greatly and depends on how much area you are hoping to cover. Additionally, resolution places a big role.

The higher up and further back you place the cameras, the more coverage you will be able to get. However, if you have low-resolution cameras then doing this will compromise the quality of your footage, potentially making it unusable.

The general rule of thumb for where to put security cameras is to try to obtain maximum coverage with minimum effort. In other words, you should angle or position the cameras to view only the edge of a wall or fence line.

Doing so will permit you to get the most out of each of the cameras and could even allow you to reduce the total number of security cameras you will need overall. Another factor to keep in mind is to try and make sure the camera placements are not easily within arm’s reach. However, the next point will cover the situations when that is not an option.

Dome cameras and bullet cameras each have their pros and cons, depending on their intended applications. In situations where a surveillance camera placement is within arm’s reach, vandal dome cameras are ideal.

Vandal dome cameras are resistant to individuals who try to tamper with the device. For instance, they make it more difficult if an intruder or trespasser were to try damaging, blocking, covering, or moving the camera. This can be especially useful because you can still acquire footage of the suspect even if they are eventually successful.

Dome cameras, sometimes called ball-in-socket or eyeball dome cameras, are not as vandal proof and resistant. However, they provide better monitoring capabilities because they have a wider degree of movement. They are also easier to utilize on a wall than their vandal proof counterparts.

Bullet cameras are best for applications that have awkward facing mounting positions. They are also generally easier to install and position. A bullet camera is ideal for monitoring small areas with a limited field of view, such as directly over a doorway.

Does Proper Placement Depend on Camera Type?

This is especially useful in such scenarios as monitoring a short but wide yard or business parking lot. Another example would be for monitoring a long and narrow hall or driveway.

In conclusion, the optimum placements for where to put security cameras depends on your settings, applications, camera types, and lens. For assistance with selecting the right security cameras for you surveillance goals, contact a member of our sales team.

Where To Put Security Cameras

Activate p2p For Remote Viewing Your Elite recorder is capable of remote viewing, and today we want to show you how to activate p2p for remote viewing.  It doesn't matter if you're using an NVR...

END_OF_DOCUMENT_TOKEN_TO_BE_REPLACED

Upgrading your CCTV system with SCK

END_OF_DOCUMENT_TOKEN_TO_BE_REPLACED

CCTV Bundles from SCK! Have you heard the news that Security Camera King now carries CCTV bundles with everything you need to secure your home or business? That's right, we've taken much of the guesswork...

END_OF_DOCUMENT_TOKEN_TO_BE_REPLACED

Basic Recorder Functions Location Guide Hey everyone Joe here, and today we wanted to talk, explain, and show you where to access some of the more basic recorder functions for your CCTV system. If you...

END_OF_DOCUMENT_TOKEN_TO_BE_REPLACED

Reasons to have CCTV At Home by SCK

END_OF_DOCUMENT_TOKEN_TO_BE_REPLACED

CCTV Notifications Setup up by SCK

CCTV Notifications Setup up by SCK One of the coolest features of SCK's CCTV equipment is remote viewing, and part of that is the ability to get CCTV notifications on your phone! Making a 'How...

END_OF_DOCUMENT_TOKEN_TO_BE_REPLACED

NVR Features with Security Camera king SCK is here to talk to you about many of the coolest, and best  NVR features available on our network video recorders today. It's important to understand what an...

END_OF_DOCUMENT_TOKEN_TO_BE_REPLACED

CCTV Accessories by SCK Security Camera King offers a wide variety of security and CCTV accessories that potentially make any job easier than ever. CCTV is an acronym that stands for or closed-circuit television. CCTV...

END_OF_DOCUMENT_TOKEN_TO_BE_REPLACED

Security Terminology by SCK Hey everyone, there's a lot of security terminology out there and sometimes the amount of information can be daunting! CCTV this, COAX that, access control this, and network that, what does...

END_OF_DOCUMENT_TOKEN_TO_BE_REPLACED

Troubleshoot Display Loss on a DVR or NVR

END_OF_DOCUMENT_TOKEN_TO_BE_REPLACED

Updating Firmware on CCTV DVR or NVR Hi everyone, Joe from SCK here and we wanted to cover a topic today that we get a variety of questions about, and that is regarding Updating Firmware...